NASAs James Webb Space Telescope sustained an impact to one of its primary mirror segments between May 23 and 25.

Micrometeoroid strikes are an unavoidable aspect of operating any spacecraft, which routinely sustain many impacts over the course of long and productive science missions in space. Between May 23 and 25, NASAs James Webb Space Telescope sustained an impact to one of its primary mirror segments.

After initial assessments, the team found the telescope is still performing at a level that exceeds all mission requirements despite a marginally detectable effect in the data. Thorough analysis and measurements are ongoing. Impacts will continue to occur throughout the entirety of Webbs lifetime in space; such events were anticipated when building and testing the mirror on the ground. After a successful launch, deployment, and telescope alignment, Webbs beginning-of-life performance is still well above expectations, and the observatory is fully capable of performing the science it was designed to achieve.

Webbs mirror was engineered to withstand bombardment from the micrometeoroid environment at its orbit around Sun-Earth L2 of dust-sized particles flying at extreme velocities. While the telescope was being built, engineers used a mixture of simulations and actual test impacts on mirror samples to get a clearer idea of how to fortify the observatory for operation in orbit. This most recent impact was larger than was modeled, and beyond what the team could have tested on the ground.

We always knew that Webb would have to weather the space environment, which includes harsh ultraviolet light and charged particles from the Sun, cosmic rays from exotic sources in the galaxy, and occasional strikes by micrometeoroids within our solar system, said Paul Geithner, technical deputy project manager at NASAs Goddard Space Flight Center in Greenbelt, Maryland. We designed and built Webb with performance margin optical, thermal, electrical, mechanical to ensure it can perform its ambitious science mission even after many years in space. For example, due to careful work by the launch site teams, Webbs optics were kept cleaner than required while on the ground; their pristine cleanliness improves the overall reflectivity and throughput, thereby improving total sensitivity. This and other performance margins make Webbs science capabilities robust to potential degradations over time.

Furthermore, Webbs capability to sense and adjust mirror positions enables partial correction for the result of impacts. By adjusting the position of the affected segment, engineers can cancel out a portion of the distortion. This minimizes the effect of any impact, although not all of the degradation can be canceled out this way. Engineers have already performed a first such adjustment for the recently affected segment C3, and additional planned mirror adjustments will continue to fine-tune this correction. These steps will be repeated when needed in response to future events as part of the monitoring and maintenance of the telescope throughout the mission.

To protect Webb in orbit, flight teams can use protective maneuvers that intentionally turn the optics away from known meteor showers before they are set to occur. This most recent hit was not a result of a meteor shower and is currently considered an unavoidable chance event. As a result of this impact, a specialized team of engineers has been formed to look at ways to mitigate the effects of further micrometeoroid hits of this scale. Over time, the team will collect invaluable data and work with micrometeoroid prediction experts at NASAs Marshall Space Flight Center to be able to better predict how performance may change, bearing in mind that the telescopes initial performance is better than expected. Webbs tremendous size and sensitivity make it a highly sensitive detector of micrometeorites; over time Webb will help improve knowledge of the solar system dust particle environment at L2, for this and future missions.

With Webbs mirrors exposed to space, we expected that occasional micrometeoroid impacts would gracefully degrade telescope performance over time, said Lee Feinberg, Webb optical telescope element manager at NASA Goddard. Since launch, we have had four smaller measurable micrometeoroid strikes that were consistent with expectations and this one more recently that is larger than our degradation predictions assumed. We will use this flight data to update our analysis of performance over time and also develop operational approaches to assure we maximize the imaging performance of Webb to the best extent possible for many years to come.

This recent impact caused no change to Webbs operations schedule, as the team continues to check out the science instruments observing modes and prepares for the release of Webbs first images and the start of science operations.

Are zebras white with black stripes or black with white stripes? 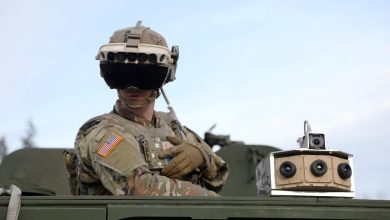 The problems with the Army’s AR goggles